SlickHampton is all about Juxtaposition…. mixing unlikely styles and genres, just playing what they think sounds good and hoping people get it – and it seems like they do. We have a large book of original compositions covering a whole range of styles (Latin, Swing, Funk, Appalacian, Fusion). That being said, we also do plenty of stuff you'll recognize. Buddy’s philosophy about covering music is that if you want it to sound like the CD, you’d be be better off just playing the CD. As you can probably guess, when you hear SlickHampton interpret someone else’s music it probably won’t sound much like the original (except when it does!).  Whether it’s a funk interpretation of a Johnny Cash tune or a Latin treatment of a gypsy jazz classic from the 30′s you’ll always hear something new.

SlickHampton was formed in 2008 as a duo with Buddy Oliver (bass) and John O'Connor (guitar). After some iterations on drums, in 2009 they finally found the missing rhythmic piece in Jay Wilson and the foundation of SlickHampton was formed. Looking to explore some new musical horizons, Buddy had been pestering an old high school friend and saxophonist, Dave Sames, to join them. Dave and Buddy had played some high level jazz together over the years, culminating in an appearance at the Montreux Jazz Festival together in 1986. Persistence paid off and Dave joined the group in the spring of 2011.

Buddy has been playing music since he was in third grade.  It was also back then that he met Saxophonist Dave Sames. In high school, he was fortunate enough to be part of the Glenelg High School band, a huge influence in his musical development. As part of this award winning group Buddy was able to refine his bass chops and began his life long love of jazz. In 1986, along with Dave, the GHS band played in the Montreaux Jazz Festival. To this day, that remains an influential milestone for Buddy. Buddy went on to get his degree in Music from Lebanon Valley College in Annville, PA where Bass was his primary instrument of study.

After college, Buddy spent the next decade playing in various rock and alternative bands playing the in Philly, Washington and Baltimore music scenes. From 1998 to 2006 Buddy served as Music Director and Worship Leader for a church in Ellicott City. Finally, after decades of musical successes and frustration, he decided to get back to his first love, Jazz and improvisational music. Unshackled from the need to make money playing music, a new sense of freedom, experimentation and joy has culminated in his formation of SlickHampton. 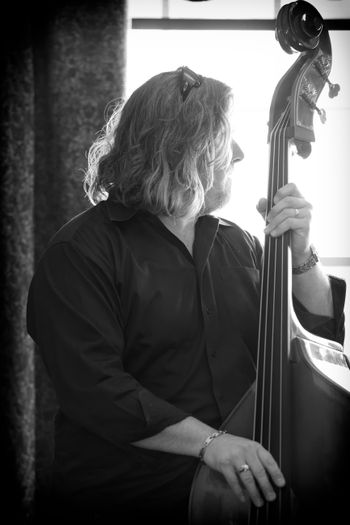 Ever since picking up the guitar at age 12, John has been exploring many different genres from the initial inspiration of Rock to 8years of instructional training in classical guitar and jazz. From the beginning, to now 30 years later, the objective has been to continue the journey of musical development through harnessing the nuances of an arsenal of styles and inspirations to expand on the sound and soul of musical expression. No matter if the venue is in a basement, social event, wedding, funeral, festival or any other formal gig the approach for developing the expression of even simple pieces is a major part of the experience. 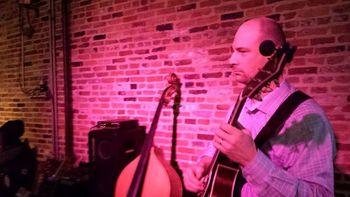 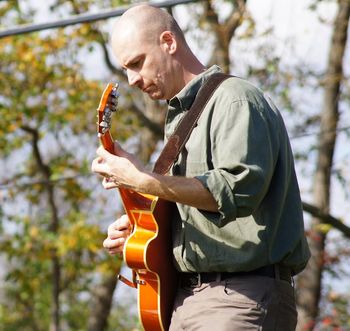 Jay has been playing drums since he was 10yrs old. He started out playing in church where he sat and learned by watching other drummers play. After service was over was when Jay would work on his skills until it was time to go.  As time went on Jay started playing for different church choirs and soloists. Now Jay has joined made a move to the widen his playing repertoire, playing Jazz, Blues, Funk and Whatever with SlickHampton.  When not sharpening his chops for the band, he listens to Steve Gadd, Tony Royster and Kenwood Dennard. 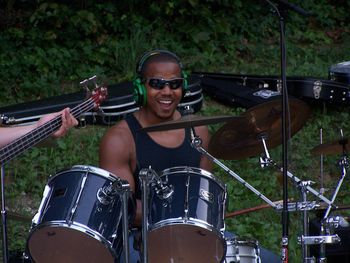