Back to all posts

The following is an excerpt from an email we received after our performance at the Takoma Park JazzFest. We really appreciate the kind words and are truly humbled by them: 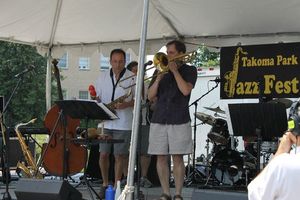 After watching Slick Hampton perform for the first time, I regret the fact that the SD card on my cell phone decided that it did not want to cooperate as I attempted to videotape your group’s performance at the Jazz Fest.

Your group left a very strong impression on me in that I truly want to watch repeat performances so that I can listen to each member’s contribution to each song, and groove along.

There was an older black couple seated on the grass behind me during your show. For the duration of your set, both of them continuously made statements that revealed their surprise at the talent of your group. At one point, the gentleman began humming and beat boxing to your music, clapping his hands, and saying something to the effect of “Oh yeah, that’s some true funk right there.” The woman kept saying “Yes, yes, they got it….” 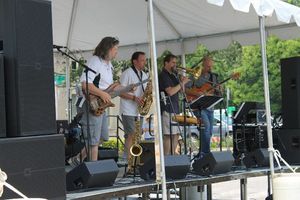 They were dancing while seated, until one of your songs made the man stand up and walk over to the dance area in front of the stage and boogie down. His wife was laughing, having a good time, and said that she could not believe that he was up there. I told her that the performance was being videotaped for the Montgomery County Television station. She began to laugh harder and said that her husband would not have gotten up to dance if he knew that he was being taped. It was obvious that your group’s vibe and talent could not hold that man back from expressing his true delight at the music you all were bringing to us.
Upon hearing the man make that comment, it was as if the ability and talent of your group was validated. I thought that was pretty cool.When her husband returned, he asked me if I knew the name of the group, I told him “Slick Hampton.” The man responded “Yeah, they slick alright.”

I can honestly say that I was also truly impressed by the pure talent of Slick Hampton. I did not expect to be blown away while watching you all perform. There is no doubt in my mind that you all are on your way to achieve much deserved success. You all rock!!